(…Or make it all better, depending how you look at it.)

For Christmas my aunt Judi, knowing how stressed out I’ve been writing this book, got me one of those mugs you color. Because that’s what it’s come to. Coloring therapy. Here is a photo of my progress: 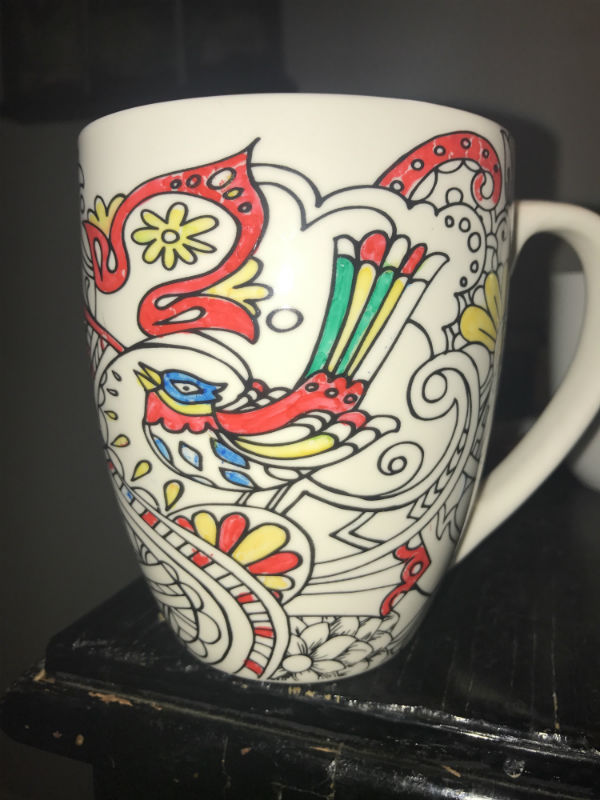 It’s hard to draw on a mug. It’s not paper. The color doesn’t really go on as much as it just gets pushed around and you end up with spaces. In the end you bake it on. I haven’t baked anything that wasn’t food since I used to make Shrinky Dinks.

So I started thinking about the day I was done writing. I’m definitely going to need a coloring book. Maybe one with fables or Disney stories. Or vintage cars. There’s a cool one for Edgar Allen Poe. I found a British one called The Colour Me Good Arrggghhhh!! Book with images from The Silence of the Lambs and other horror movies. Apparently people threw a fit because it was marketed toward 5-8 year olds, saying it’s “inappropriate.” 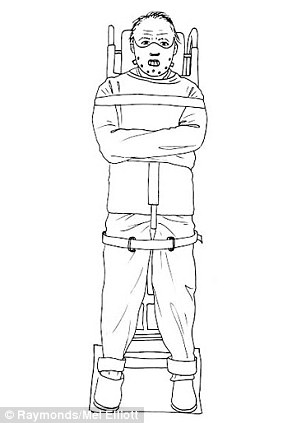 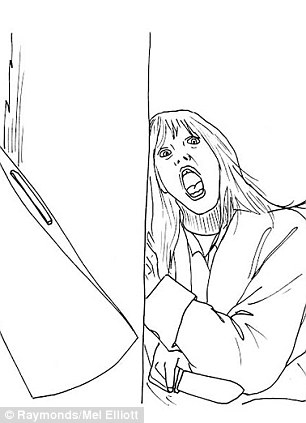 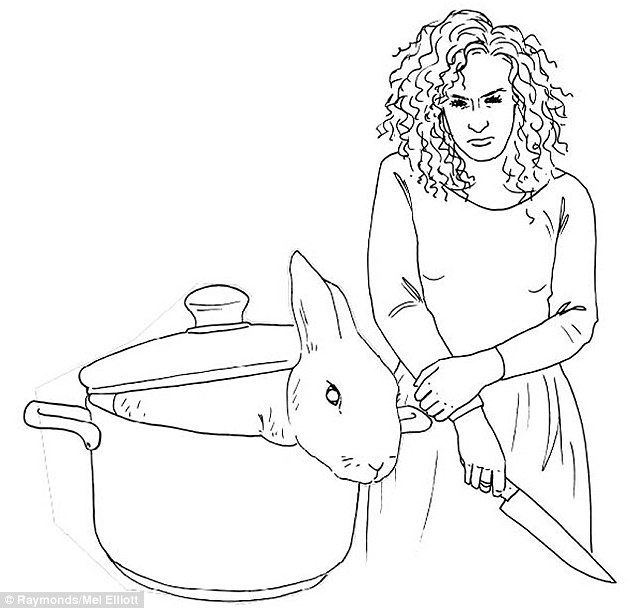 Which leads me to these. “Coloring book corruptions.” You really can find anything on the internet. 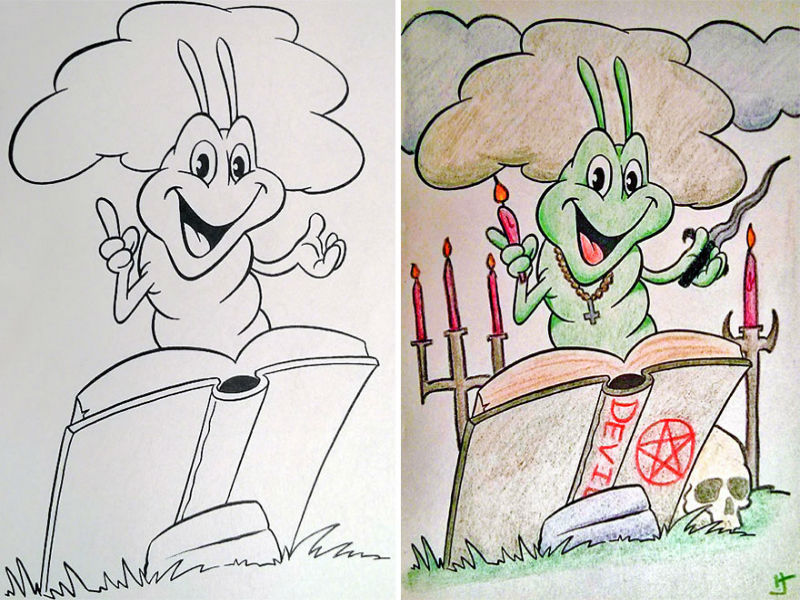 I think this was supposed to be a happy slug reading a book. Now it’s he’s a devil worshipper, complete with an upside-down cross around his neck and a dagger in his hand celebrating a ritualistic killing. 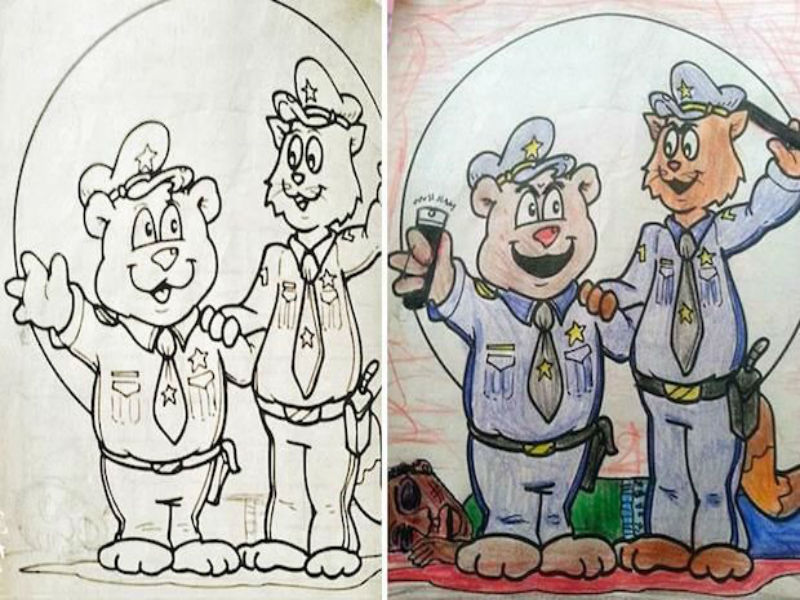 Dog: “Did you see me fuck that guy up with my taser?” (referring to the homie on the ground behind them who, judging from the pool of blood, might be dead.)
Cat (*scratching head with baton): “Yeah, that’ll teach him not to come ’round these parts!” 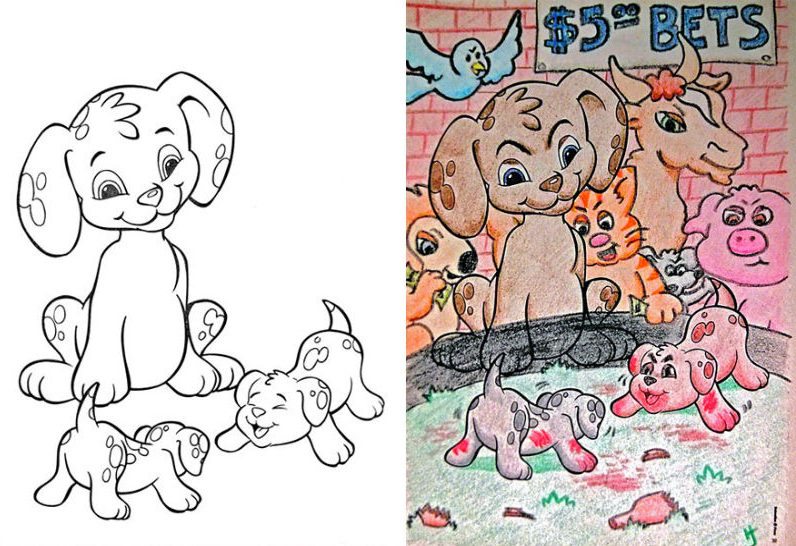 I’m wondering what exactly the pink pig on the right might be doing with his hands. 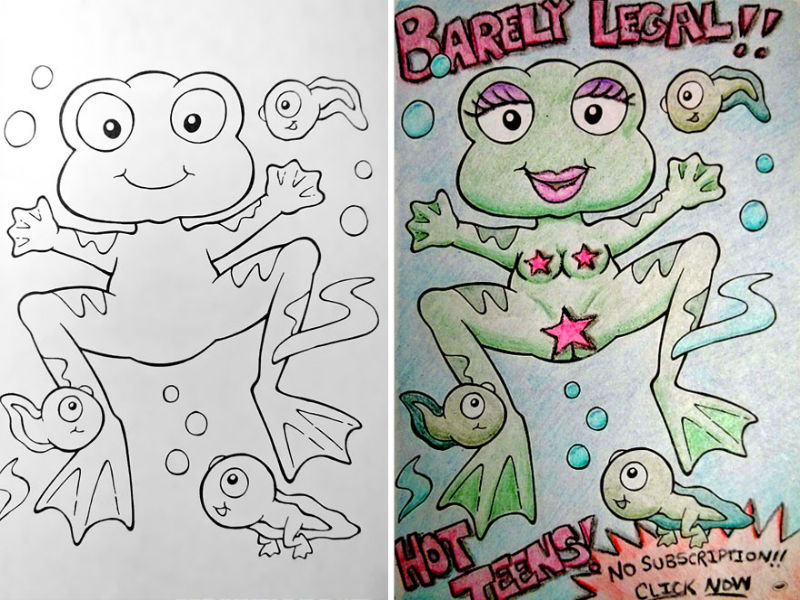 Someone didn’t get enough attention as a tadpole. 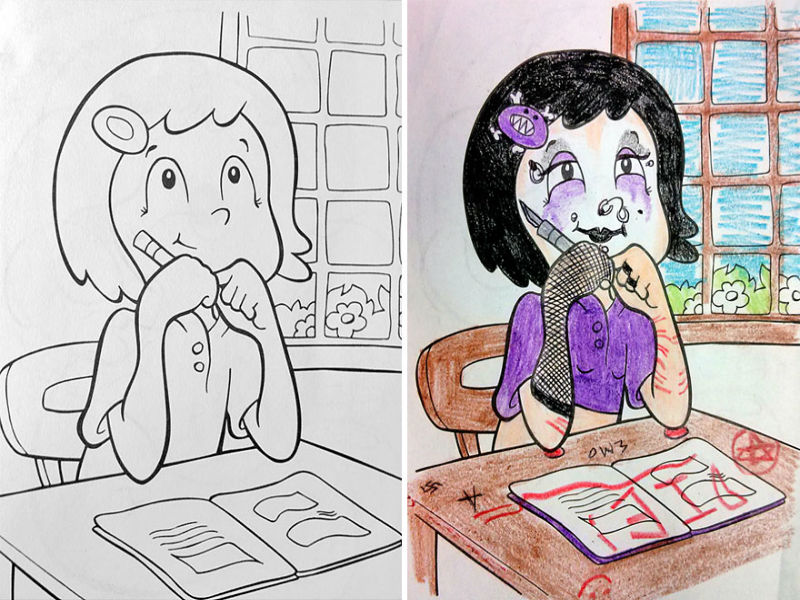 This chick cannot decide what she wants to be. She’s a cutter. She’s emo. She’s goth. She shops at Hot Topic. But there’s also a pentagram, a smiley face and a swastika. And what is that, blood under her elbows? 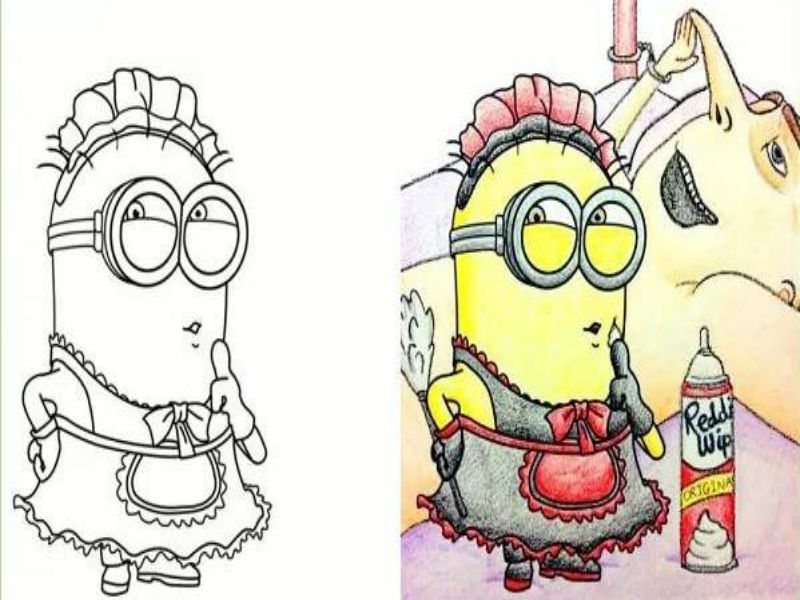 I can’t tell if the guy handcuffed to the pole is enjoying this little fetish game or he’s been drugged. 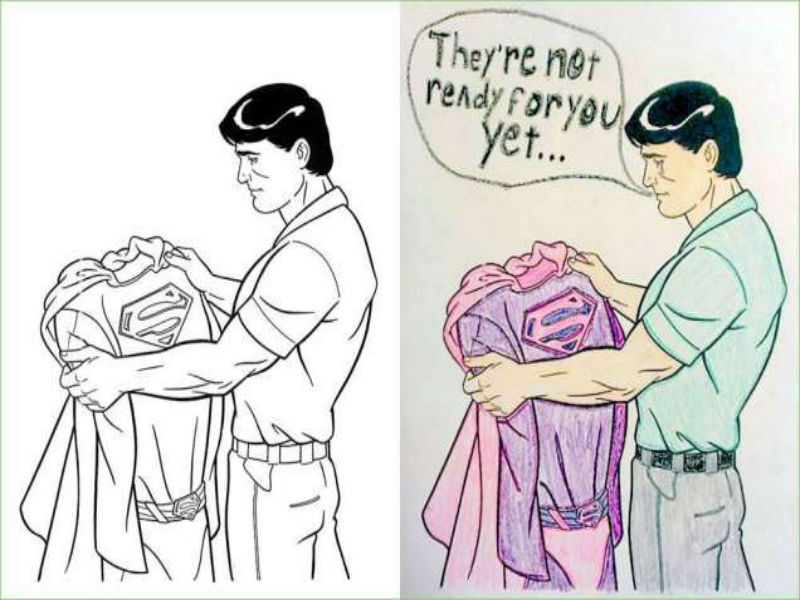 It all makes sense. Think about how much time Superman must spend at the gym. 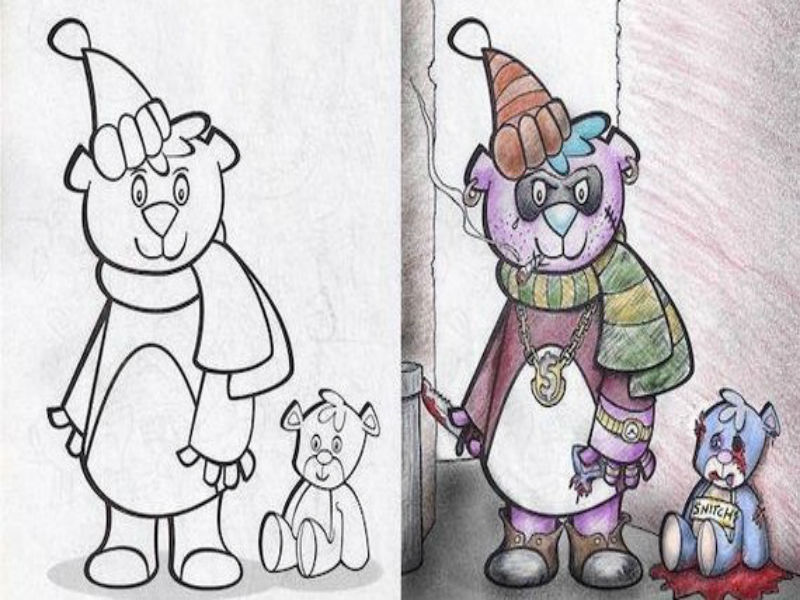 Big teddy bear goes gangsta. The watch makes me think he’s Italian, but the necklace says Compton so I’m not sure what variation of gangsta he is, and then there are the earrings which don’t help. All I can tell is they’re in an alley where the little teddy bear just got his ear sliced off for snitching. 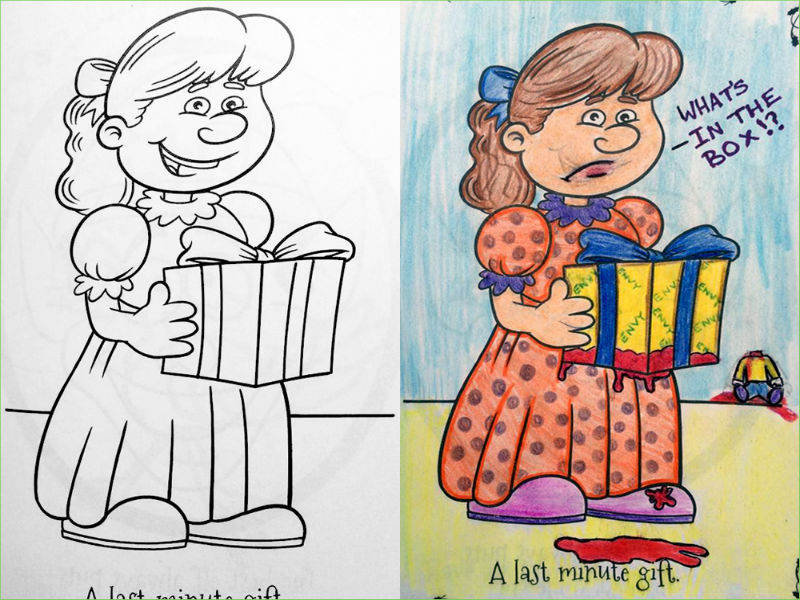 “Her pretty head.” Thats what. 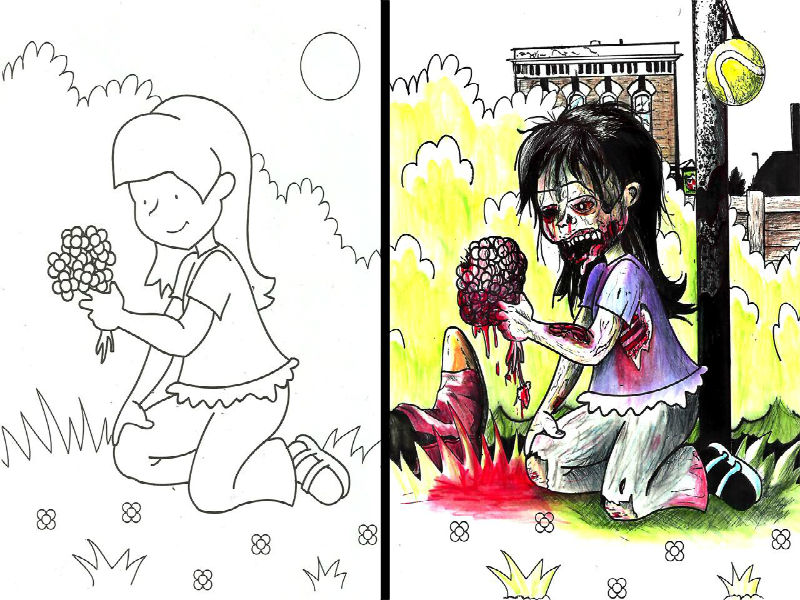 It seems as though girlfriend has escaped from a mental hospital, gone zombie and is eating the brain of someone who wears cowboy boots. I have no idea what the tennis ball has to do with it. 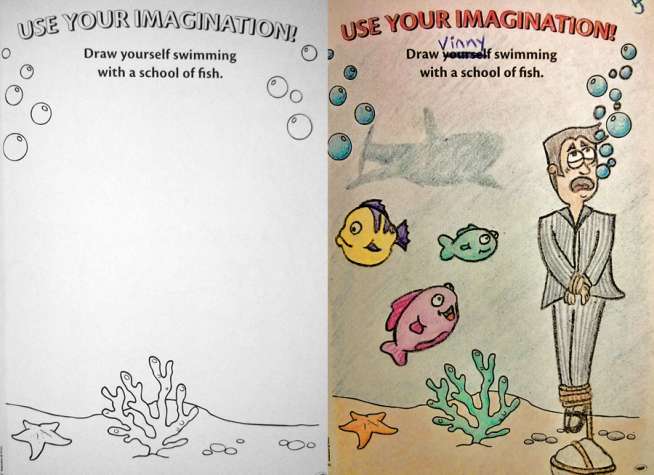 Who is Vinny and why is he wearing Mary Janes? 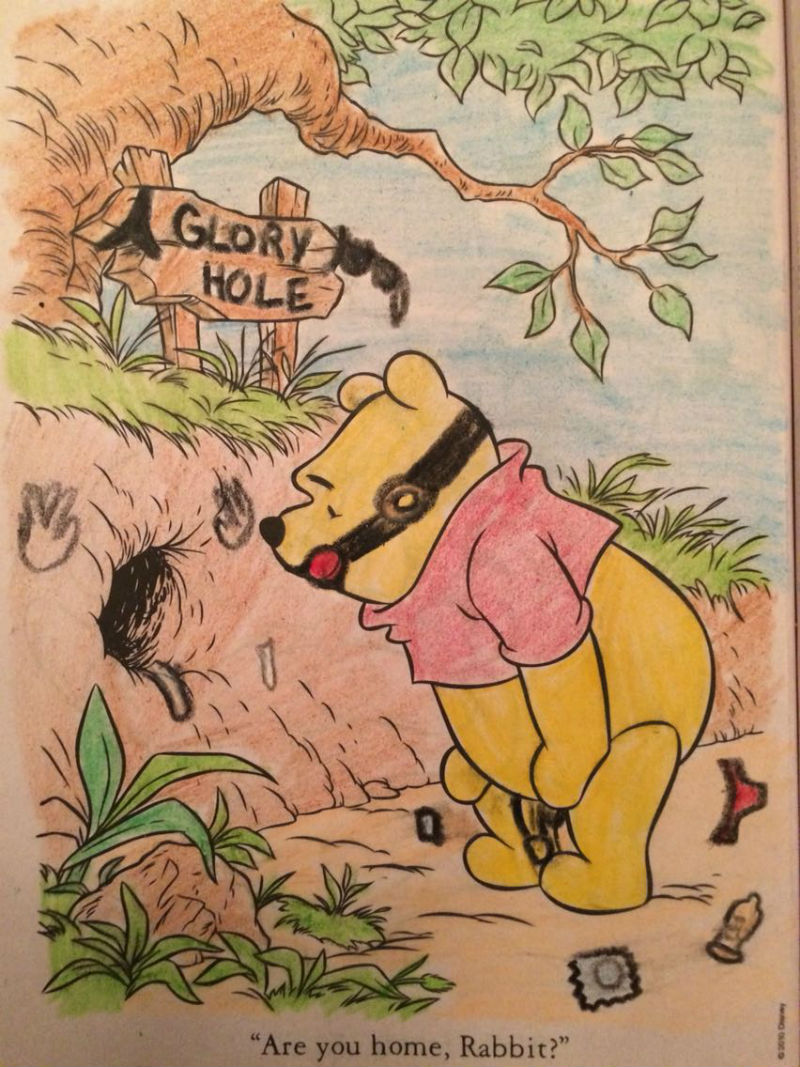 The paw prints on the hill are a nice touch. Oh, and the penis. 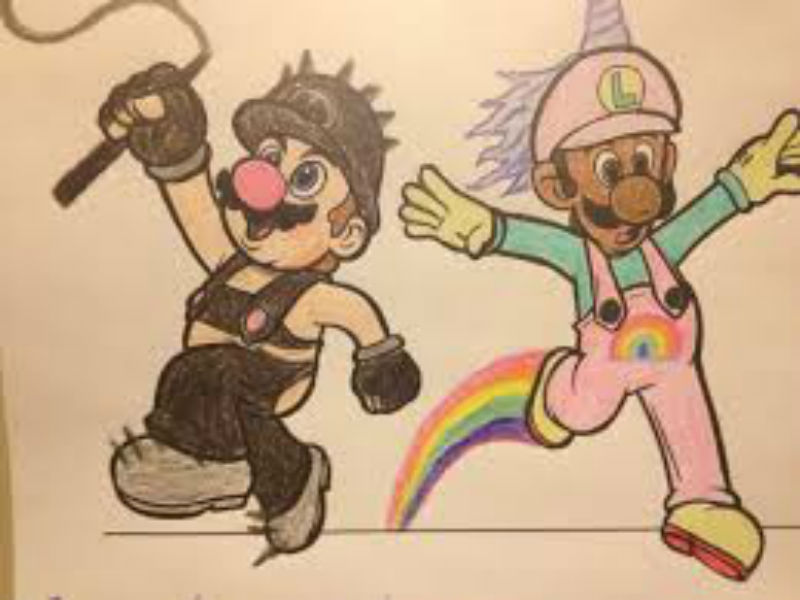 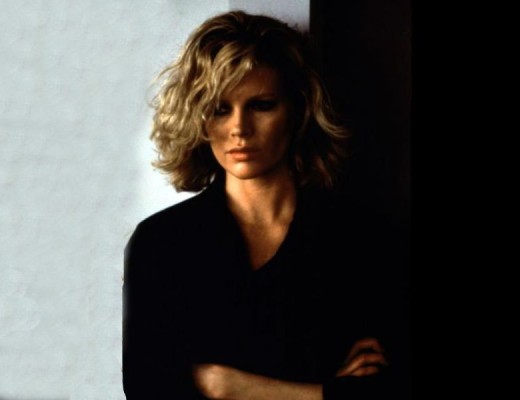 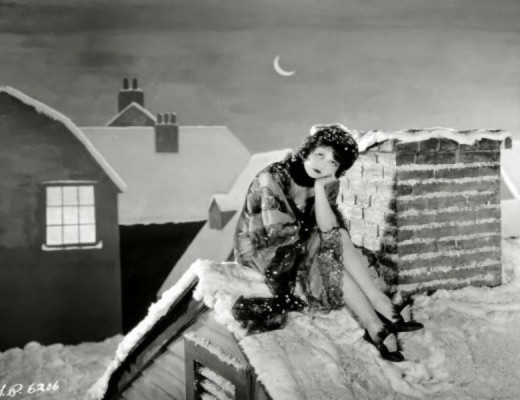